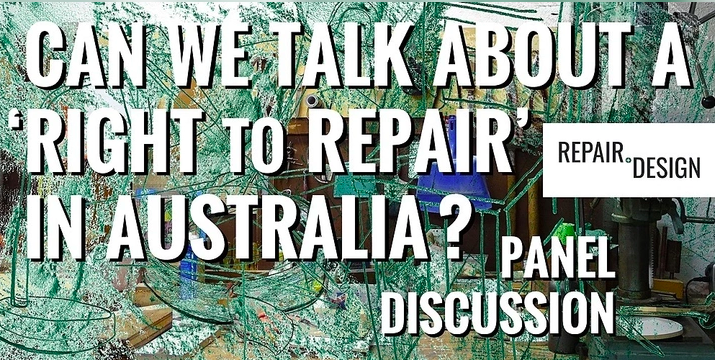 Jesse Adams Stein gives us some background on the Right to Repair movement – in the lead up to the panel discussion this week at the Design Innovation Research Centre at the University of Technology Sydney. ‘Can we talk about a ‘Right to Repair in Australia?’ on 2 October (full details below). John Gertsakis from Ewaste Watch will be joining the panel discussion with a particular emphasis on why smart regulation is key to both repair and waste avoidance.

The ‘right to repair’ has been a topical issue in international media and to some extent locally. But why does repair matter? Is it just because we like to tinker with our things?

Ewaste is the fastest growing waste stream in the world. Australians are the fourth highest generators of e-waste per capita globally, generating an average of 23.6 kg per inhabitant, per annum. In 2016 the world generated over 44.7 million metric tonnes of e-waste, only 20% of which made it into appropriate e-waste channels. Ewaste is a particularly virulent problem, both because of the significant environmental costs of electronics manufacture, and because of the toxic materials that can quickly end up in the waste stream after the object is swiftly discarded. We also now know that repair is a climate issue. A recent report from the European Environmental Bureau calculated that extending the lifetime of all smartphones in the EU by 3 years would save around 4.3 metric tonnes of potential carbon emissions.

What is the Right to Repair?

While the Right to Repair can now be understood as a general liberal concept – the idea that people should be able to fix the objects they own – it is also a specific political and legislative movement that emerged from the United States. That movement is specifically concerned with the repairability of particular technologies, most particularly smartphones, laptops, tablets, cars and agricultural equipment.

In the contemporary context, an increasing number of technologies and objects are run by computers using proprietary software. This includes a vast range of technologies, including most obviously IT devices, but also coffee machines, high-end toasters, tractors, fitness trackers, and motorised blinds (and so on). This software tends to be covered by copyright protections (TPMs – Technological Protection Measures), which protects the original object manufacturer (OEM) from having their device – and its internal functions – copied by another manufacturer. Having software embedded into our everyday appliances makes them harder to repair – it is no longer as simple as using a screw driver, taking off a back panel and having a look around.

Proposed Right to Repair legislation in the US does not generally impact directly on the design of objects, but it demands that repairers have access to enough information in order to conduct repair and maintenance without voiding warranties. This means that owners of large agricultural equipment can have their machinery fixed on site, or close by, rather than travelling long (and expensive) distances to the original manufacturer for repair.

Although proprietary software is a major consideration in this debate, the ‘right to repair’ issue is not solely about copyright. It also pertains to the hardware, or the physical casing, of the technological object in question. Many ‘smart’ devices are designed in such a way that their interior workings are hermetically sealed, unable to be opened without force or damage. This is a form of ‘defensive’ design, which makes the design closed and sealed, deliberately preventing tampering or access by an authorised repairer. Such objects often have no screws or opening panels; they do not enable replaceable parts or batteries. This is the ultimate form of planned obsolescence: where a manufacturer would rather their object break and unrepairable (in less than 2 years), rather than allow the object’s owner – or a third party – to fix the item.

What’s the status in Australia?

Environmental advocates have been calling for legislative reform to the Product Stewardship Act and a crowd-funding campaign has been launched (by The Bower) for the Right to Repair.

How a ‘right to repair’ might interact with our existing IP and consumer protection laws remains to be seen. Further, it is likely it won’t be called a ‘Right to Repair’. While there are some state exceptions, Australia as a nation does not have a Bill of Rights, so discussing ‘rights’ in this context is impractical.

An extended version of this article by Dr Jesse Adams Stein can be found here.

This event is part of the Repair.Design research project, UTS School of Design.

This panel was developed in collaboration with Guido Verbist, The Bower Reuse & Repair Centre

By John Gertsakis and Rose Read

The Push for Electronics Durability, Reuse and Repair