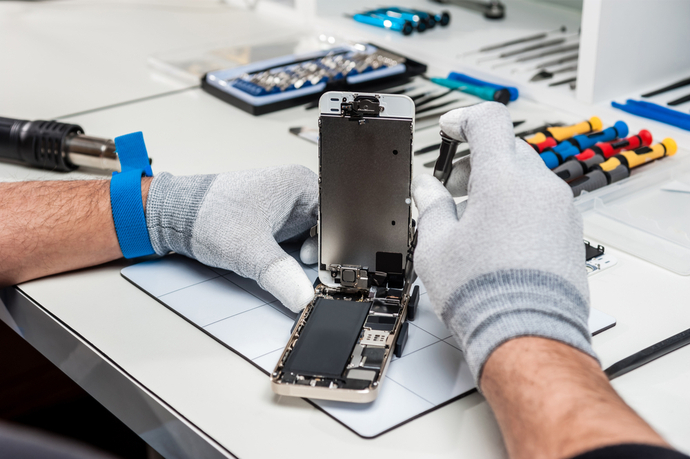 The Reconnect Project is the brainchild of one savvy businessman and a battle-hardened waste campaigner. Andrew Mackenzie has been supplying products to the repair service industry for over 20 years. Annette Mayne has over 15 years’ experience in the waste and recycling sector, working with councils, community groups and charities. Read about their novel project to extend product life with positive social intent …

Mobile phones. They’ve transcended their original use for connecting to other people through calls and messages.

We use them to record our memories and they act as our modern address books. It’s a TV in our pocket. They’re a useful tool for everyday interactions, such as paying for goods or booking a taxi. With the rise of the smartphone, came the rise of apps – and now the mobile phone doubles as a personal computer for us access the internet, check our emails and broadcast our lives via social media. The mobile phone wakes us up in the morning and is often the last thing we use before going to sleep at night. We carry them with us, a part of our everyday lives, just like house keys and our wallet.

Eighty-eight percent of Australians now own a smartphone with the biggest growth in ownership being in the 65 – 75 year age bracket[1]. As we rapidly approach a saturation point where the majority of the population owns a smartphone, the opportunity for industry growth in the sale of handsets shifts towards replacement or upgrade. The first iPhone hit the market in June 2007 and Apple’s 12th generation iPhone, the iPhone XS, was released in September 2018.

Planned obsolescence and the cost-benefit factor in having items repaired is a growing area of concern globally.  Frustrated with the lack of repair options for an iBook, Kyle Wiens founded iFixit as a student in 2003. The wiki-style online resource now has over 25,000 free repair manuals created by ordinary people who have figured out how to fix items, such as replacing a battery in an iPod or repairing scratches in reading glasses.

In 2013 The Repair Association was formed. It’s a US-based advocacy group lobbying governments and manufacturers for the consumer’s right to repair their own goods. Early in 2017, the Swedish government dramatically reduced the tax rate on labour for repair, from 25% to 12%, making it economically a better option to repair than replace clothing, bicycles and household appliances.

Recent years has seen an increase in the number of hole-in-the-wall mobile phone repair shops providing services such as screen replacement and data recovery. This growth could be due to the increase in replacement cost of smartphones as newer models are released. Mobile Muster, the national mobile phone recycling program, has recycled over 11 million handsets and batteries since commencing in 1998[3]. Yet despite having an extensive network of drop-off locations and a free reply paid postal service, only 8% of consumers actually recycle their old phones[4].

Australians tend to hold onto their old phones as a backup or are likely to give them to family or friends[5]. As a nation, we lag behind other countries who have embraced the second-hand device market, such as 27% of Japanese or 22% of the UK population who either sell or trade-in their old phones. So why is it that there’s an estimated 23 million mobile phone handsets sitting in drawers, cupboards and boxes in garages across Australia[6]?

In 2015, Mobile Muster classified seven reasons for hoarding and not recycling mobile phones: sentimentalism, just-in-case, can’t be bothered, hopeful it’ll become a collectable, technophiles, gift giving and security conscious[7]. A quick quiz amongst friends, family and colleagues highlighted three main reasons for holding onto old phones: data security concerns, as a backup, and convenience/knowledge of what to do with an old phone (whether it’s working or not).

Fair enough that people want a backup phone. But if we can overcome the concerns around data security and provide a convenient service – then there’s an opportunity to embrace the repair and reuse of mobile phones here in Australia.

The Reconnect Project has a straightforward mission: to give old phones a new life. Established as a social enterprise, The Reconnect Project aims supply mobile phones to people in need such as those who are socially disadvantaged, women escaping domestic violence situations or newly arrived refugees. Some phones may be repurposed as music players for dementia patients in nursing homes.

By partnering with a network of over 300 retail locations across Australia, The Reconnect Project will provide on-the-spot secure data erasing, giving peace of mind to those donating their phones. Other initiatives such as corporate phone donation days and working with e-waste collectors will provide additional sources of phones. With a dedicated team of tech repair specialists, the donated phones will be repaired or stripped for component reuse. A proportion of refurbished phones will be available for sale at competitive prices, providing the necessary funding to support the social enterprise aims, whilst also offering affordable, good quality, second-hand phones. And by working in conjunction with Mobile Muster, any non-viable phones or components will be recycled accordingly.

About The Reconnect Project
The Reconnect Project is the brainchild of one savvy businessman and a battle-hardened waste campaigner. Andrew Mackenzie has been supplying products to the repair service industry for over 20 years. Annette Mayne has over 15 years’ experience in the waste and recycling sector, working with councils, community groups and charities. This enthusiastic duo first worked together in 1996 as the retail marketing team for the Australia/New Zealand division of a multi-national repair industry group. With their combined knowledge, experience, networks and passion, they’re challenging Australians to give old mobile phones a new chance at life.