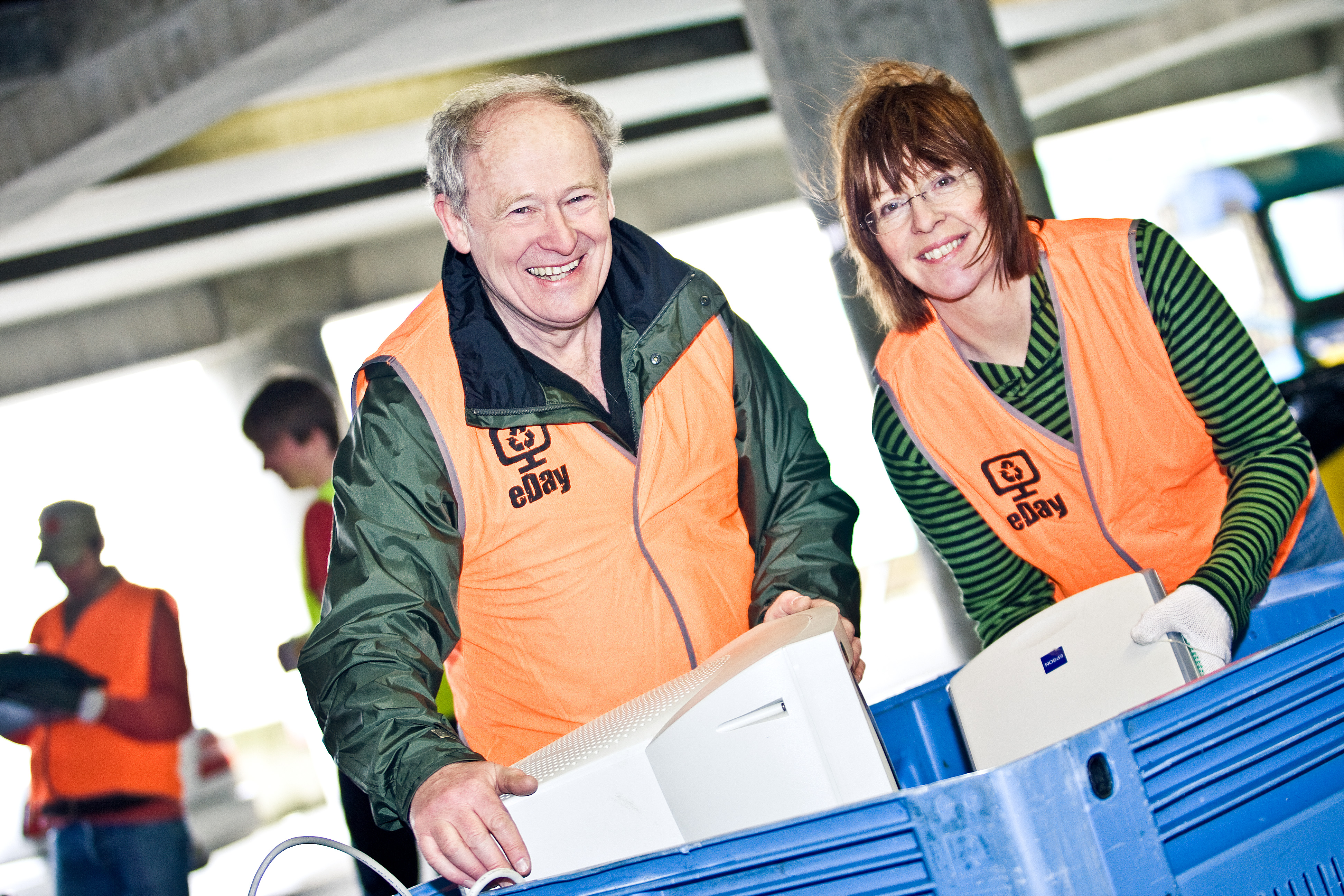 Laurence Zwimpfer is without doubt New Zealand’s ewaste pioneer. He continues to be a leading advocate for stewardship regulation and is committed to seeing government action fill a major policy gap. Read more …

Once upon a time, many years ago, New Zealand was feeling very smug about the incredible progress we were making on our journey towards ewaste product stewardship.

We looked over the Tasman and discovered people just like us who also believed that product stewardship was the answer to life.  The big difference was that our Aussie cousies had been working away at this for years, encountering all sorts of legislative and regulatory barriers.  “You don’t know how lucky you are, mate”, they said, quoting a well-known and much loved (but now late) New Zealand icon, who just happened to have taken up residency in Australia[1]. “We Aussies have to deal with a diversity of State Governments as well as a Federal one; how will we ever get ewaste product stewardship over the line”, they moaned, “you Kiwis are so lucky to have just have one government to deal with.”

By the end of 2006, we Kiwis were feeling very pleased with ourselves.  With the support of Dell and a huge team of volunteers organised by the Computer Access New Zealand Trust (CANZ), we had just had our first free computer collection day with stunning results – 53 tonnes of computer ewaste collected in Wellington on one day at one drop-off site.

In July 2006, CANZ had prepared a report on New Zealand’s ewaste problem for the Ministry for the Environment[2].  The report outlined a process for establishing a nationwide ewaste product stewardship scheme and suggested that this could be developed and implemented by the end of 2006.  We received another boost with the support of MP Nandor Tanczos, the leader of the Green Party. Nandor led the development of what became the Waste Minimisation Act (2008), which included the legislative environment for product stewardship. In 2007, the Ministry for the Environment convened meetings of industry representatives, and these resulted in two draft product stewardship schemes, one for TVs and consumer electronics and the other for computers and computer-related equipment.

No wonder our friends in Australia were jealous of the progress we had made in just two years, after they had battled for 10.  But little did we know how quickly the smirk would be wiped from our faces!  A change of Government in New Zealand in 2009 put a halt to any government intervention; instead, industry was encouraged to develop their own voluntary schemes.  It would take another 9 years and another change of government before product stewardship returned to the government’s agenda.

Fuelled by the success of the Dell Free Computer Recycling event in Wellington in 2006, Dell received numerous requests from local authorities in other parts of New Zealand to run similar collection events.  Despite Dell’s global leadership in addressing ewaste challenges, they were understandably reluctant to take responsibility for all of New Zealand’s ewaste.  As a result, the CANZ Trust agreed to coordinate free collection events for computer equipment in collaboration with local authorities. These events, called eDays, were held on one day each year between 2007 and 2010.[3]  Each year, the size and scope of the eDay event increased, from 12 regions in 2007 to 60 in 2010, including the Cook Islands. By 2010, over 18,000 cars were dropping off some 900 tonnes of computer waste each year.

eDay received critical funding support from computer suppliers as well as Government to cover the cost of national transport and recycling.  But in 2011, the Government withdrew its support, citing a preference for an ‘everyday’ solution rather than a ‘one-day’ event.  This resulted in the establishment of the RCN e-Cycle scheme, a national network of ewaste collection facilities where consumers were required to pay for each item of equipment dropped off for recycling.  This scheme proved to be unsustainable and lasted less than four years, with RCN being driven into receivership[4].

New Zealand switched from analogue to digital TV between 2012 and 2014 and this brought TV ewaste into focus.  The Government chose to subsidise nationwide collection events for a limited time (18 months) with the TV Takeback programme.  This resulted in the collection of 220,000 TVs.

Together, these activities over 10 years – eDay, RCN E-Cycle and TV Takeback – have diverted around 800,000 electronic devices from landfills at a cost to the Government of around $20 million (or $25 per device). But during the same 10 years an estimated 10 million new computers and TVs were sold in New Zealand.  None of these initiatives has resulted in a long-term sustainable solution. Meanwhile, the volumes of new electronic equipment continue to expand at 10 times the rate of current recycling efforts.

A wake-up call from the UN

New Zealand received a wake-up call in December 2017 when the country was “named and shamed” in a UN-backed report as a nation that not only generates amongst the highest volumes of e-waste in the world but also has the lowest documented rates for recycling.[5]  The report estimated that New Zealanders generate over 20 kilograms of e-waste per person each year[6].   While some other countries have slightly higher per capita volumes, this is mitigated by the existence of national e-waste collection and recycling schemes. For example, Europe leads the world, achieving a 49% recycling rate for e-waste in 2016 compared to New Zealand’s ‘official collection rate’ of 0%.

Light at the end of the tunnel?

On 21 January 2018, the Associate Environment Minister, Eugenie Sage, also a Green Party MP, announced that she recognised ewaste as a priority issue.[7] This is not quite the same as declaring ewaste to be a ‘priority product’ under the Waste Minimisation Act (2008), but nevertheless, a significant step forward in terms of political leadership.

Producers and other suppliers of electronic equipment made it clear to the New Zealand Government in 2008 that they would not invest any further effort in developing product stewardship schemes until Government made a commitment to introduce ‘level playing field’ regulations.  They have maintained this position for the last decade, with the only exception for consumer ewaste being a voluntary scheme (RE:Mobile) developed by the mobile phone companies for cellphones[8].

This scheme has proven to be commercially successful and profits are helping to support Sustainable Coastlines, an NGO promoting clean water. But it does suffer from a lack of public awareness; around 80,000 phones are recycled each year compared to annual sales of around 1.8 million[9].

Sadly, after four years of operation, most New Zealanders still don’t know where to take their old phones for recycling.

The National Television and Computer Recycling Scheme has now been operating for over five years with over 1800 collection points and more than 230,000 tonnes equipment being recycled.  But lessons have been learned about unexpected outcomes such as the negative effects of competing product stewardship arrangements, the need to increase public awareness and the scope of electronic goods included in the scheme.

Maybe New Zealand can learn from these experiences and reinstate our momentum from a decade ago.

[3] eDay Trust, eWaste in New Zealand: Five Years On, A report evaluating the success of eDay in the context of global trends and efforts in New Zealand and the Pacific during the five years from 2006 to 2011 to address the growing challenge of e-waste, June 2011

[6] A report by SLR estimated 19kg of e-waste per head of population, growing to 27kg per head by the year 2030, E-waste Product Stewardship Framework for New Zealand, June 2015

Abour Laurence Zwimpfer MNZM
Laurence chairs the eDay New Zealand Trust, which was set up in 2010 to promote product stewardship solutions for electronic waste.  Laurence managed the national eDay computer waste collection events from 2006 to 2010 and is a tireless advocate for ewaste product stewardship.